Tucked down an alleyway just off the main shopping street in Castle Douglas is real ale heaven. Sulwath Brewers has firmly put Dumfries & Galloway on the real ale map. With skill and passion, the team at Sulwath make traditional beers which are enjoyed all over Britain and around the world. Today Sulwath has a loyal band of beer fans and numerous awards and plaudits for its brews.

Sulwath is named after the ancient name for the Solway estuary, reputed to have had a ford or crossing between Scotland and England. Using only natural ingredients their beers are truly a taste of Dumfries & Galloway, with the renowned softness of the water producing ales which have a mellow flavour, without the harshness that harder water tends to create.

The story behind the brewery

Founded by the parents, Jim and Helen, of managing director Allen Henderson Sulwath has developed a rich portfolio of beers since 1996. They have locally inspired names such as Criffel, Galloway Gold and The Black Galloway.

Helen’s family had been involved in hop growing in the Hereford area of England for three generations. It was only after a long career in banking that her husband Jim decided to take the plunge into brewing.

Jim and Helen originally set up the business next to a dairy farm in Southerness, moving to their current premises in the old steam bakery building in Castle Douglas in 1999. Allen had already joined the company full time and the family set about transforming the building, which had been empty for a number of years.

Currently Allen and his wife Julie are part of a small but dedicated team who are at the heart of the business. Everyone is hands-on at Sulwath, which produces around 1,000 gallons of beer a week. They brew traditional beers, using local produce where possible to provide natural real ales endemic to the region. The best quality Maris Otter malts are used in Sulwath’s ales, along with whole hops from the Hereford area, plus water and yeast.

Sulwath simply buy the best fresh hops for their beers. Their ingredients are all natural: water, barley, hops and yeast, brewed traditionally with no concentrates, colouring or extracts and with all the ingredients shown on the bottle label. Using different blends of hops and types of barley malts to create the distinct taste of each Sulwath ale, all the beers are made to exacting and labour intensive standards to ensure consistency of taste.

One of the most popular beers is Criffel Ale, which is an India Pale Ale and the brewery’s original ale. Cuil Hill is a pale amber light and refreshing session ale. Another favourite is Knockendoch, a dark copper coloured beer reflecting an increased roasted malt content.

Other popular beers include Galloway Gold, a lager, and the multi-award winning, robust porter/stout and The Black Galloway. Sulwath is also known for creating celebration and seasonal ales, such as The Grace, made specially for The Selkirk Arms in Kirkcudbright where Robert Burns wrote The Selkirk Grace in 1794. There is also Reinbeer, a festive ale which takes pride of place at Sulwath’s annual Christmas event at the brewery in December, the Tam O’Shanter for Burns’ Night and Woozy Wabbit at Easter. 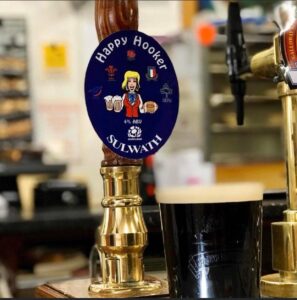 All Sulwath’s ales are made and put into casks or bottled on the premises in the brewing hall, with visitors able to sample the beers in the brewery reception and bar area. Fully licensed, the visitor centre is open Monday to Saturday for visitors to sample the ales. They have a good solid mix of tourists and local people who come to the brewery on a regular basis. On a Saturday afternoon it can be standing room only in here and there’s always a good atmosphere.

Sulwath Brewers sells draught beer all over the UK. The team attends events all over Dumfries & Galloway and further afield promoting their ales, picking up numerous awards along the way. They have now won more awards than they can put up on the wall! The team are particularly proud of the Brons (bronze) award from the Stockholm Beer and Whisky Festival they won some years ago. The Black Galloway was also a finalist at the 2017 CAMRA Champion Beer of Britain Championships in London.

Sulwath were also honoured to meet Prince Charles when he visited the region in the aftermath of the devastating foot and mouth outbreak of 2001 and the Queen, when she visited Dumfries, Castle Douglas and Kirkcudbright in the summer of 2010.

Allen and the team have worked hard to make Sulwath Brewers a success. They thoroughly enjoy what they do, sharing their passion with other real ale enthusiasts. Their skill and success in the business of crafting ales makes them a valued part of the Guild family.