Mohamed Sangare (Momo) comes from the Ivory Coast from a small village called Divo. His traditional African languages are Dida, Dioula and Bambara. He was brought up by his grandmother and they worked together in the fields. The djembe drum was important to Momo from an early age.

When he was about nine years old he started to play the djembe drum more seriously as a way to make money in the city of Abidjan. Momo moved to a small area of Abidjan called Abobo to learn about playing the rhythms of djembe from senior musicians and to learn the craft of repairing the djembe.

Momo went to primary school for a few years but by the time he was 11 years old school was finished and he specialised in learning more about drumming. This also included how to repair the different size drums and how to pull the cords into different patterns and knots to tune the drum.

All of Momo’s skills have been learnt by watching his elders and spending many hours observing and following instruction from the musicians around him. He learnt the different rhythms and played in other villages learning about rhythms from different regions.

As a teenager Momo joined a professional group of musicians and dancers who toured to different locations around the Ivory Coast. The group performed and taught music and dance to mainly French tourists. Momo became a master drummer for this professional group and a soloist performer. After learning more about organising group performance work Momo then became his own master drummer and set up his own group. He bought a set of drums and did all the repairs for them himself.

Momo organised his players to go to local music festivals and play at local marriage ceremonies in Abobo. He also set up teaching opportunities for tourists to learn dance and djembe. As a master drummer Momo also supported new young drummers by teaching them the different traditional rhythms and giving them some performance work.

Momo’s drum business in the UK

Momo now lives in the UK, building up his name amongst the African performance musicians who play all over the UK in Leeds, London, Manchester, Bristol, Cardiff, Devon and Weston-super-Mare. Momo is also learning about UK culture as he has never experienced life in any country other than Africa. In fact his first time on an plane was when he came over to the UK 2019. Since then he has played at big festivals like WOMAD and local festivals – as well as at African events, marriages and private birthday parties.

Momo understands his drum repair craft – not only because he understands how to do it technically but because he is also a musician and knows how the drum should sound and how it will work when played. As a musician the drum is a very special part of African culture and is not just a drum but a living thing. When Momo repairs each drum he is changing the feeling of the drum from a sad energy to a positive energy.

The drum is not just an instrument of sound but a home for drum spirits. The drum spirits come from special wood in regions of west Africa that have the best climate to produce a quality hardwood. Spirits are also in the skin of the animal used for the drum such as the goat or cow. The spirits of ancestors from the local village will also be called by the drum and there is also the energy of the human hands that make the drum.

In the old days the blacksmith carved, skinned and made the iron rings for the drum as a one-man job – and were very gifted and special people. Their skills were passed down from one generation to the next. Today the iron rings are made separately, and the loggers who cut the trees down cut the wood into small drum-size logs. Often they are carved out into a basic drum shape, called a shell. The shells are sold to the drum maker who then works on the shells to carve them into smooth and patterned drum bases.

The next stage is to then secure the skin to the drum using metal rings and strong cords. The skin for djembe is normally goat skin. The health of the goat and the dry grass of Africa eaten by the goats help create the strength, toughness and thickness of the skin. This is why the climate is very important in all the parts of making a good djembe drum. 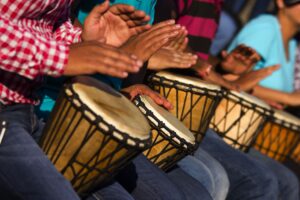 The cord controls the tension of the skin and the tuning of the drum. The cords are pulled by hand with a baton. It is very hard work and requires a lot of knowledge to know how much to pull on the cord without breaking the drum. A djembe makes three basic sounds from the middle to outer middle to edge. The bigger the head of the drum the deeper the bass middle sound will be. The djembe can give many tones as it has a broad range of sound.

Every drum is its own unique character. When you play your drum a piece of you also goes into the drum and it becomes your special friend. Many master drummers will have a drum they say is their wife or husband because their understanding of every part of their drum and their emotions when playing it is a partnership of making music together.

Momo loves his work with djembe drums, both playing them and repairing them. What is incredible is that he works completely by hand so all the traditional methods from hundreds of years of drum making are still being used by Momo today in the UK.