As a master pipe maker Scottish-based Guild member Ross Johnstone has acquired a unique set of skills. Based near Stirling, north of Edinburgh, Ross creates custom-made bagpipes and is one of only a few pipe makers who works on the pipes by hand. He also provides a refurbishment service for all types of pipes and is able to refurbish them to the exact specification required.

Ross first started training at the age of 18 and undertook a five year apprenticeship under the stewardship of master pipe makers in Edinburgh. Ross then set up his own business in 2013. He has further developed his skills and passion for the task over the last 25 years and is now regarded as a master pipe maker himself.

The bagpipe is of course the national instrument of Scotland and the music of the Scottish Highlands. The Highland bagpipe is perhaps also the best known in the world.

Most Scottish Highland pipes are made up of a blowpipe, bag, chanter and three drone pipes (two tenors and a bass) as the main components. The chanter has finger holes to control the melody. Air is blown into the bag  through the blowpipe, filling the bag with air while the piper squeezes the air out using their arm while playing the chanter with both hands. Air passes through the reeds, creating the continuous sound expelled from the drone pipes at the top of the bagpipes and the chanter at the base.

Ross has customers of all levels from learners to advanced players, some of his more experienced players include some of the world’s leading pipers such as Pipe Major Ben Duncan of the Royal Scots Dragoon Guards, the Field Marshal Montgomery Pipe Band (who were crowned Champions at World Pipe Band Championships in Glasgow in 2018) and the Perth & District Pipe Band plus a number of piping silver and gold medallists.  Ross produces pipes with a full-bodied rich sound with an excellent tone and finish which are widely admired.

Johnstone Bagpipes offers its own range of custom handmade bagpipes, such as the JB1, JB2 and the special Johnstone Bagpipe model. Instruments are made to commission and produced in the same way that bagpipes have been made for centuries. Hardwoods such as the finest African blackwood, are used for the drones and chanter.

Creating drone pipes in the workshop requires expertise with the lathe. This process involves drilling and reaming through hardwood to create cylinders with long bores before the cylinder is turned on the lathe. The conical shaped chanter requires a tapered bore prior to turning. For decoration combing (parallel ring grooves) and beading (the wider areas between sets of ring grooves) is applied on the lathe using special tools.

The mounts for bagpipes JB1 and JB2 can be created from African blackwood or imitation ivory while nickel is used to create plain ferrules, slides and ring caps. There is a range of options for engraving if required. The beautiful Johnstone Bagpipe special model includes imitation ivory for the mounts while the ferrules, slides and ring caps are made in silver or nickel, again with a wide range of options for engraving.

Ross loves refurbishing historic bagpipes and has worked on bagpipes that date back to the 1840s. He enjoys this work as he loves giving old instruments a new lease of life while maintaining a piece of history. Most of the jobs involve repairing cracks, splits and turning new pieces to fit the individual pipes. Wood may need cleaning and a light recombing, usually followed by a wax and polish. Sometimes nickel or silverwork needs removing and refitting, or completely replacing. Ivory may need carefully cleaning and polishing. 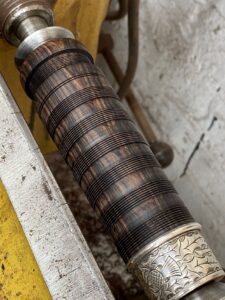 A David thow bagpipe came in to Ross’s workshop without mounts, ferrules or caps for refurbishment. All the fittings were replaced in imitation ivory, copied from a similar thow set from the same period which rejuvenated the instrument for the customer. Similarly, a sorry looking Robertson bagpipe was given a thorough clean up and refurbished. The wood was deep cleaned, recombed, waxed and polished. All the nickel was removed, refitted and polished – another successful achievement.

As a highly talented craftsman Ross has a great attention to detail. His skills and experience over the years means his work is to an exceptionally high standard. Each job Ross does is completed with care and attention providing a fast, reliable service and great workmanship.

Ross’s plans for the future are to continue to be recognised as the premier master bagpipe maker in the UK. Ross wants to build and grow the business and work in an industry he has always been passionate about, and in which he is now recognised as a master in his craft!